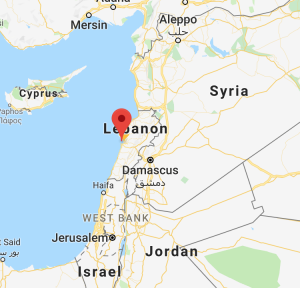 About 24 clock-hours after departing O’Hare, we arrived in Beirut and met up with our teammate who arrived the day before. Some of you may know John Schoff from St. Mark’s Geneva.

Do you recall that moment when Dorothy wakes up after the cyclone and steps out of Auntie Em’s farmhouse into Oz, with Toto? Do you remember what she says? “Toto, I’m thinking we’re not in Kansas anymore.”

That’s about what Beirut feels like: we are not in Kansas anymore. Or Illinois. Or the West. We’re tired and were hungry, though hunger was satisfied with a wonderful Middle Eastern meal at the seminary guest house where we are staying. I enjoyed the harrowing ride through the streets of Beirut: technically, they drive on the right side of the road, but it seems that this isn’t always the practice!

We are soaking in Arab music, the jumble of cultures in this world-class city, the beauty of the Mediterranean, the hot muggy daytime and the cool breeze in the night. We are loving the blend of Arabic and French and English spoken here. Arabic is spoken in Lebanese homes, but English and French are commonly spoken fluently by all educated adults. Some French words are commonly mixed into the Lebanese Arabic, actually: often “merci” for thank you, and “bonjour” for hello, amidst an otherwise entirely Arabic conversation.

We are experiencing this formerly first-world country, which has reverted to “developing world” in the past few decades of conflict and economic recession, as we use water bottles for brushing teeth and as the entire neighborhood goes dark several times each night because electricity stops powering the area. We come as learners and hope to learn more in the coming days.

Tomorrow, we head with our partner agency for some cultural orientation in the morning and then to visit with refugee families by mid-day on Tuesday.