Rob Lewis shares the rest of the story…read to the end!

The Bible is the story of Jesus, God become man, by which the catastrophe and mortifying shame of the human condition becomes the means by which we become living human beings – the glory of God. “Liberty is the chief thing that the gospel has to bring to man,” writes Northrop Frye.  “Man is constantly building anxiety structures, like geodesic domes, around his social and religious institutions…if…the Bible is a manifesto of human freedom…one would expect it to be written in a language that would smash these structures beyond repair, and let some genuine air and light in.”

The Bible restores our breath as we breathe it in. It lightens our way as we let its light in. It releases us from our anxious obsession and burden to be right, if we let it in, and internalize it, instead of using it. When we use the Bible to buttress our theology and promote our doctrine, we smother its story. We take its breath away and darken its light. It becomes a tool instead, heavy and hurtful in our hands.

The Bible is a story that does not impose its way on its listeners. It does not preach, moralize or indoctrinate. Dorothy Sayers reminds us doctrine (or dogma as she calls it) is drama first, “the terrifying assertion that the same God who made the world lived in the world and passed through the grave and gate of death.” (Creed or Chaos, 25))

Facts don’t reveal who we are, but our contradictions almost always do. The same, I suppose, goes for God: it’s the incarnate God – the God who created us becoming one of us – that makes a story. And God makes us human. He writes us into the story, in a way which we – who want to be like God – would never write it. In this impossibly contradictory story only God can write, God invites us to find ourselves, and know finally who we really are.

All the Story for All the Souls

“Tell it again!” is why we “go to church, to hear the story with others, and return every week hungry to hear it again. Our symbols, paintings, icons, and colors imprint the words in us. Our rituals enact the words. In church we begin to do what the story tells us to do. We proceed in, participate in the liturgies of word and sacrament, and go out to keep telling and doing the story, to “walk in love, as Christ loved us and gave himself for us, an offering and sacrifice to God.”

To walk in love is to live out the story which lives in us. We tell it again as we walk in love out of the church into other people’s lives. Whoever God puts in front us.

The Rest of the Story 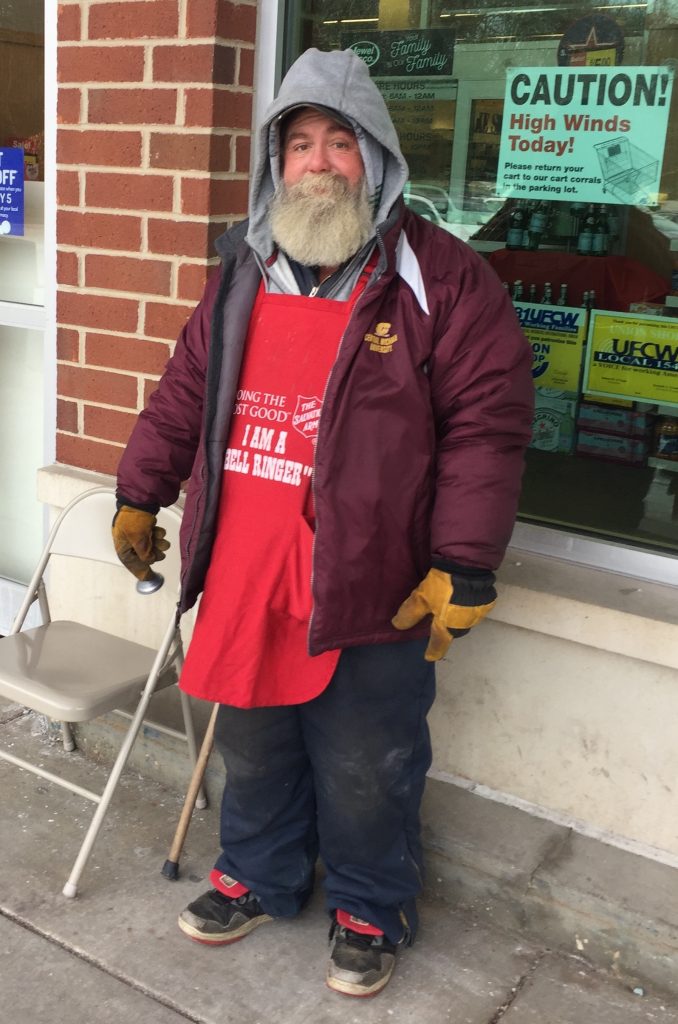 In early December, Tammy and I drove to Bartlett to meet Chris who works as a Salvation Army bell ringer at the Jewel/Osco grocery store. We saw several people stuffing bills into the slit at the top of his kettle. “Must be his likeness to Santa Claus,” I thought. We handed Chris an All Souls check made out to Hide Away Lakes Campground where he and his family were living in a trailer. I asked our treasurer to write out at the bottom of the check, “One-month rental for James C Morgan.”

I had met Chris several days before at the McDonalds on County Farm and Roosevelt Road. Chris ordered a McChicken biscuit and a large coffee with ten creams. I thought I heard incorrectly, until I looked at the receipt. “1 L Premium Roast ADD 10 cream”

Chris continued his improbable story about bringing his entire family to Illinois from Alabama every Christmas season so he and Amanda can ring bells at two different Jewel/Osco grocery stores.

“Why not ring bells in Alabama?” I asked.

“Because we know the bell ringers up here. We’ve been ringing bells with them for years.”

I had no rebuttal. I didn’t realize Salvation Army bell ringers formed their own communities.

Two weeks before Christmas I asked Chris what his children might like for presents. He immediately texted me pictures, a radio-controlled truck for Devon, and a Cry Babies Kristal doll for Emily. Our home group contributed money and I bought the toys at Walmart and Target. On my way to deliver them to Chris at the Bartlett Jewel/Osco, the Kristal doll startled me with authentic baby noises from the back seat. I sped up.

“I teared up a little bit when Devon opened his present,” Chris told me later. “He was so excited.”

Last week the family moved into permanent subsidized housing in Saint Charles. We plan to collect household items for them. Next Friday Chris will have heart surgery. “I’ll tell you how it goes,” Chris said.

Chris will probably never go to our church. But he came to us, and now we’ve all gone to him, and entered his story. As my fellow deacon, Joy, said, “He’s one of us now.”

Stories beget stories. The gospel, the central story of the Bible, is a story that continues to be written in our lives, and through us into the lives of others. It continues to set us free into the adventure of faith, if we let it in and live it out. If we keep telling it again.