In this, her first day at the refugee camps, Jennifer Merck details the sharp contrasts that depict Syrian refugee life in the Bekaa Valley.

Today, we visited with six refugee families in tent settlements in the Bekaa Valley, which is northeast of Beirut. Much of Beirut sits on a mountainside. We “switch-backed” over this urban mountain to the other side, where the valley lies beyond.

The Bekaa (or Beqaa, in Arabic) is arid and flat, punctuated by small vineyards. Without the tent settlements and in better financial times, this could be the terrain of resorts and wineries. Today, landowners rent small plots to Syrian refugees for up to $200 a month, which sometimes include a power cord connection and access to a water tank. The “tents” are small, wood 2×4 framed structures, typically covered in tarps. Tarps also create walls for an attempt at privacy. Some have roof cross beams; others do not. Some have tarps for roofs; some have wooden roofs. Each home we visited today mentioned fire as a constant fear. One family showed us the tent home of a neighbor that had recently burned. The mother struggled when she returned to retrieve her children. The youngest, an infant, died in the fire.

What struck me most today were the contrasts: beauty amidst ugliness, contemporary amidst the ancient, and familiarity amidst the unfamiliar. 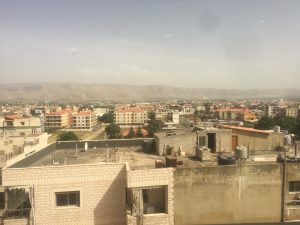 People are people. I noticed these things today that felt familiar:

And these things felt unfamiliar today:

The families shared these prayer requests with us today:

Would you pray with us for our hosts today?