All Souls exists to ground its people in the gospel and send them out. The “glorious gospel of the blessed God” (1 Tim 1:11) is the essence of our preaching and teaching, our life together and our life apart. For some, this rhythm is a continual and weekly gathering and going. For others it is an intensely communal experience which prepares them for the next phase of their lives and sends them out.  In this post, Austin Stapella tells us how All Souls helped ground him and prepare him for his ongoing education at Duke University. We sorely miss Austin and Becky even as we know they will always be a part of us. 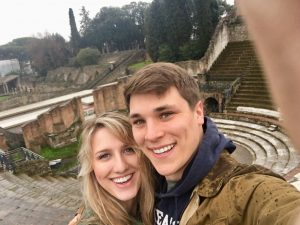 It was in the midst of a major personal transition that I first visited All Souls Anglican Church. At the time, I was working toward my Bachelors in Ancient Languages and Theological Studies at Wheaton College and my aesthetic sensibilities had changed dramatically. I was becoming increasingly discontent with the non-denominational megachurch I had attended throughout childhood and adolescence and was searching for a more traditional style of worship. My wife, Becky, and I found All Souls through a google search for local Anglican parishes and decided to attend that Sunday. The people were warm and welcoming, and the service was engaging and inviting. But it was the catechesis hours that truly captured our attention and enlightened us to the uniqueness of All Souls.

I have just finished my first year at Duke Divinity School in the Master of Divinity program as I work toward earning my PhD (in either the letters of the Apostle Paul, or the writings of the early Greek Church Fathers), and I have sorely missed All Souls, though, not entirely for the reasons I thought I would. Its members will often playfully deprecate the community for being esoteric and inaccessible, an idiosyncrasy which I find endearing but in no short supply in my present location. Though it is perhaps not All Soul’s most evident characteristic, what I have found myself longing for is the earnestness of the congregation. To be called earnest, in our especially cynical age, is often more a slight than a praise. In our era, it is the cynical who are frequently regarded as sages, capable of peeling back the façade of ordinary existence and perceiving the true vacuity of all that is commonly held sacred. Treating objects, words, or events as meaningful or profound is regarded as a quaint naiveite. Cynicism and sarcasm are common parlance in the lingua franca of academic settings, and the type of sincerity and enthusiasm I experienced at All Souls are hard to come by in my present circumstances.

What I appreciate so deeply about All Souls, and the catechesis hours especially, is not simply the information that is conveyed, but the eagerness with which the congregation teaches and receives it. I think of the passion and enthusiasm displayed by Matt Milliner when he introduces the series at the beginning of the academic year, or Joel Erickson’s lesson on finding Christ in the films of the Coen Brothers. These teaching sessions, and others like them, are not strained exercises in saccharine religiosity or self-aggrandizing flexes of piety (with which I am very familiar). Nor are they motivated by a generic appetite for the esoteric and obscure, but a genuine desire for insight into those things that truly strike us as meaningful, for matters of existential significance.

Despite their reputation, it seems to me that it is the cynical who are truly naïve, predicating their existence on a comforting lie: that contrary to our intuitions those things which seem to matter do not. Cynicism, which poses as the wisdom of the sophisticated or cosmopolitan is truly the most superficial of naivetes, a means by which one can gird himself against disappointment and despair by insisting in the ultimate triviality of those things which strike us as profound – a palisade against disillusionment that insulates one from meaningful experience. The cynic can never be made a fool since he wagers nothing of himself to begin with. Cynicism is the vernacular of nihilism.

I found that at All Souls this posture is given no quarter. Certainly, I have witnessed personal misgivings and moments of apathy. But I have not seen the community allow this to infect its spirit. Instead, what is encouraged is a posture of vulnerability, a willingness to admit that those things which seem to matter do matter, and the courage to engage in them with the whole person. All Souls is a community in which all are exhorted to pursue knowledge of God and of his Gospel with unbridled enthusiasm and sincerity of heart. It is a place where no subject is treated as a mere intellectual diversion, but is instead enthusiastically conscripted into the hope-bringing message of the Church.

When we are scourged by disillusionment or disenchantment it may be tempting to see such tribulations as an occasion to set aside ones’ earnestness and embrace an austere expectation of disappointment, to meet that which is existentially significant with sarcasm and a winking anticipation of inevitable letdown, a temptation I have personally felt in light of many recent circumstances. But I thank the people of All Souls for encouraging me by their deeds to never allow myself to be overwhelmed by cynicism or be given over to nihilistic indifference but to instead wear my love for God and my desire to know him on my sleeve, and in sincerity and earnestness, wager all I have on the hope of the Gospel.