Rob Lewis writes about entering into the life of a church visitor. Post 1 of 2

Chris first came to our church on a Sunday in mid-November last year, and stood quietly and obtrusively just inside our front door. Our narthex is a small space, an intersection between two flights of stairs where two or three gathered together creates gridlock. Stocky and square, with watery blue eyes, and a thick gray beard, Chris has a Santa Claus kind of look. I call him Chris Kringle.

We gave Chris a cup of coffee, a gas card for his truck, and a $25 Subway card. It’s our food, fuel and caffeine visitor’s packet which sends visitors on their way, and for which Chris kept coming back.

Several Sundays ago, I met Chris at the door of the church, and handed him two gift cards. Someone had already poured him a cup of coffee.

“Where are you from?” I asked Chris.

“Alabama. Me and my wife, Amanda, and our two children, Emily and Devon.” This was a twist. Chris brings his family north for the winter.

One question led to another, and two days later I visited Chris’s temporary residence, a dingy Motel 6 in Naperville, to buy Chris and his family one more night of shelter.

Chris had come to our door, and I had now stepped through his door and into his story. 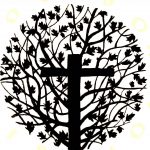 We do what God first did. He entered our story, lived and wrote it with us.  The Bible is the most interesting book ever written, because it’s about God becoming one of us, telling his story through us so that it becomes our story, as well as his.

The Bible is a story that continues to be written as we read and live it in the lives of others.

Every story worth telling is worth telling again. “Tell it again!” When my children were little, they begged me to tell the same story, regardless of how many times they had already heard it.  My stock story was about a chubby young boy named Billy-bo who passes gas in the event of an emergency, in which a social embarrassment became a lifesaving skill. I made up variations every night I told it. “Billy-bo Saves Macy’s Thanksgiving Day Parade” was my favorite.

My kids never once said, “Dad, I don’t believe that story.” Make-believe stories are fundamentally true. If told well, they make us believe. The late Mr. Rogers understood this. He used make-believe to help children work through conflicts and resolve fears.

Jesus also understood this. He stepped into our world, and used make-believe stories called parables to tell people who he was, and who they were. Jesus told the truth in his parables which divided those who began to believe in him from those who didn’t. To the believers Jesus often told the story again. His parables still draw us in and compel us to believe his own unbelievable story.  As we step in we begin to believe.