Jennifer visits the ancient port city of Byblos and gains a sense of how Lebanon’s history  contributes to the current complexity of its refugee crisis. 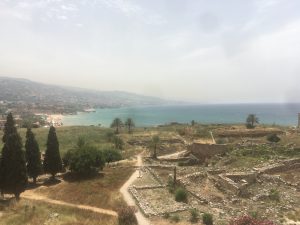 Today, we toured Byblos, an ancient port city an hour north of Beirut. Byblos has been continuously inhabited since about 5,000 BC and contains Phoenician, Roman, and Crusader ruins. Seeing the ruins and hearing the stories of conquering nations contributes to an understanding of the area and the complexities of Lebanon’s relationships with outsiders.

As a port city, Byblos was much-desired by many nations. It was a hub for commerce. Lebanon’s location as a middle-eastern shipping hub has contributed to it being repeatedly conquered, which has contributed its people being leery of outsiders, especially those who have previously conquered them, such as Syria. This makes those Lebanese churches choosing to serve the Syrian refugees unique in their country. Not all churches are willing to welcome Syrian refugees.

It is challenging to fully understand the political, social, and demographic climate in Lebanon. The last census was in 1932. Lebanon’s government has been organized upon the confessed religions of its leaders, with an attempt at balance between the religions represented in Lebanon. The government has been unwilling to conduct a census for fear of upsetting this delicate balance.

With this backdrop, demographic estimates are challenging. Some say Syrian refugees are 1/3 of the entire population of Lebanon. However, they have not been counted, nor registered since 2015. Some say 30% of Lebanon’s citizens are themselves in poverty. Many are concerned that Syrians fleeing violence in their own country are draining the resources of Lebanon — taking jobs from citizens and bringing violence to Lebanon.

The United Nations estimates that there are around 1.5 million Syrian refugees in Lebanon.

What should the Church in Lebanon do in the face of refugees who are already here? What about those who continue to be smuggled over the mountains, as violence continues to erupt in Syria? How should the Church in the U.S. respond? How might we support the efforts of the churches here in Lebanon who are choosing to welcome refugees?

Lots to think about. Will you pray with me for: