Jennifer wonders what God might be doing with what we’ve undone. 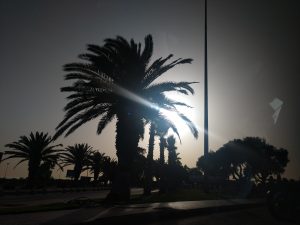 Beirut => Frankfurt, and then two days and two nights in Frankfurt.

I’ve been thinking about Joseph: Jacob’s Joseph, the favorite son, he of the Coat of Many Colors. After the coat, after the dreams, after the pit, after being sold into slavery by his brothers (his brothers!), after the brothers put the blood of the lamb on the many-colored coat and told Jacob his favorite son was dead, after Potiphar and Potiphar’s wife, after prison and more dreams, after pleasing the Pharaoh and being put in charge of Egypt’s storehouses, Jacob’s other sons arrived, sent by their father: a whole community hungry, in the midst of famine. Perhaps Egypt’s wealth of grain could save them?

Unexpectedly, the brothers find themselves face to face with the brother they thought was dead. He was certainly dead to Jacob. And they lived with the guilt of their choices each day. As they begged for grain — and forgiveness — Joseph says this:

For me, this captures the essence of the doctrines of God’s providence & omniscience. God is good. God knows. He is in the business of transforming evil and making good things.

I wish I could see the good God intends from the evils of this world.

I choose to believe that He intends good, even when it is not evident.

I don’t know. I do believe that as His people, we are called to all of these things, because we are His people.

All Lebanese people speak Arabic, whether they come from Muslim families, Catholic families, evangelical families, or any other kind of family. Arabic is the language in the home, the one you are born with. Educated Lebanese learn English or French (or both) in addition. Many educated Lebanese are comfortably tri-lingual.

Similar to British English vs. American English, there can be slightly different terminology in Arabic, depending upon the region. Angela tells me that her friends from the past 9 months use a different word, but Lebanese and Syrian Arabic speakers have a word that means many things: come, come on, come here, let’s go, hurry up, and some other variations.

The word is yalla, sometimes spelled yallah. Some say the origin of the word is an acknowledgement that wherever we go, God goes with us. That is to say: “Let’s go, Allah will be with us.”

I think we need to be about God’s business — God’s business of righting the wrongs and making the bad things good. Perhaps we can simply look around us and find what God is calling us to.