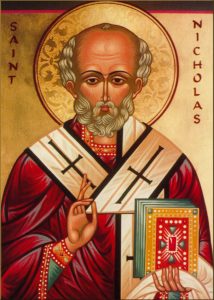 Myra was a thriving maritime city on the Mediterranean Sea when Nicholas was a child. Though Nicholas is considered of Greek descent, the contemporary city of Demre (which sits in the same spot, northwest of the island of Cyprus) is situated in modern-day Turkey.

The Bishop of Myra was familiar with illness, famine, and economic downturns. He is believed to have lived when years were counted in 3 digits, not 4 — from March 15, 270 – December 6, 343. Long before antibiotics and scientists studying viral loads and incubation periods and potential vaccines, legend tells us that Nicholas’ parents died when he was young. His uncle, Bishop of Myra before him, is said to have raised him in the Church.

Nicholas’ wealth offered him an opportunity to observe the poverty and illness around him. Some legends tell us that the young women whose dowries he provided in bags of gold were saved from lives of prostitution — what we might even call human trafficking today. For a poor family, selling their daughters would ensure the survival of the family and might avoid a harsh life of starvation for their daughters.

This year, we celebrate Nicholas’ Feast in a different world than we have in the past. Around us, we see businesses closing. We see people losing their jobs and trying to figure out how to pay the rent. We see people who are sick with a novel virus, and we see families grieving the loss of loved ones. Traditionally, Nicholas is believed to have died on December 6. Hence, this early-Advent date has become his feast day. Nicholas’ world — and the compassion it nurtured in him — seems similar, in some ways, to the world we live in today.

Because of the virus, we are unable to gather for our traditional drama that honors St. Nicholas and reminds us of his compassion for the suffering. Yet, there are many ways we can honor St. Nicholas and learn to live our lives in service of Nicholas’ God, who loved him and called him by name.