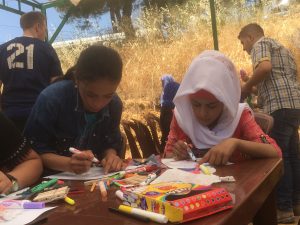 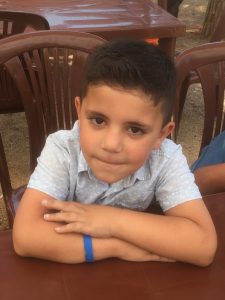 I’ll leave you with a fascinating observation from today. The Kids Camp purchases catering from a local restaurant, one of many efforts to support the local economy. As we began to hand out plates of salad, rice, ground beef, and roasted tomatoes, I noticed that at many tables, a few children did not have food yet. As I served them, they kept on passing their food to the others at the table. Rather than receiving the plate placed in front of them, they passed the plate on to the other person at the table who had not been served. This happened repeatedly. I began to notice that the older children were ensuring that their younger siblings were fed first.

I surmise that the older ones were unsure if there would be enough food for all. I was deeply impressed by what must have been something their parents taught them — to look out for the little ones. The church that the Kids Camp partners with is investing in the Syrian people in the tent settlements near their building. They are building relationships with children and their parents, assisting them with food and education. In so doing, they are showing the love of Christ to children and their families, many of whom have never encountered Christians prior to fleeing Syria.

Please pray with us for the next 2 days of Kids Camp — for safety for the children and leaders, for creativity and stamina for the leaders, and for clarity as we teach the theme of this Kids Camp — FORGIVENESS.